Just thought I’d share a pic of our big turtle having breakfast at our breakfast bar. Papeete Marina, Tahiti. 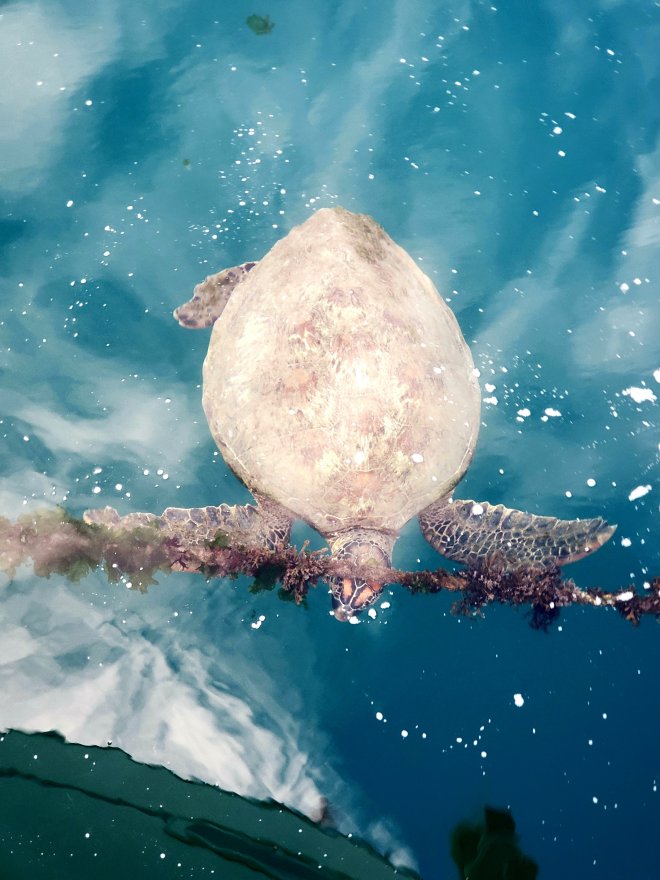 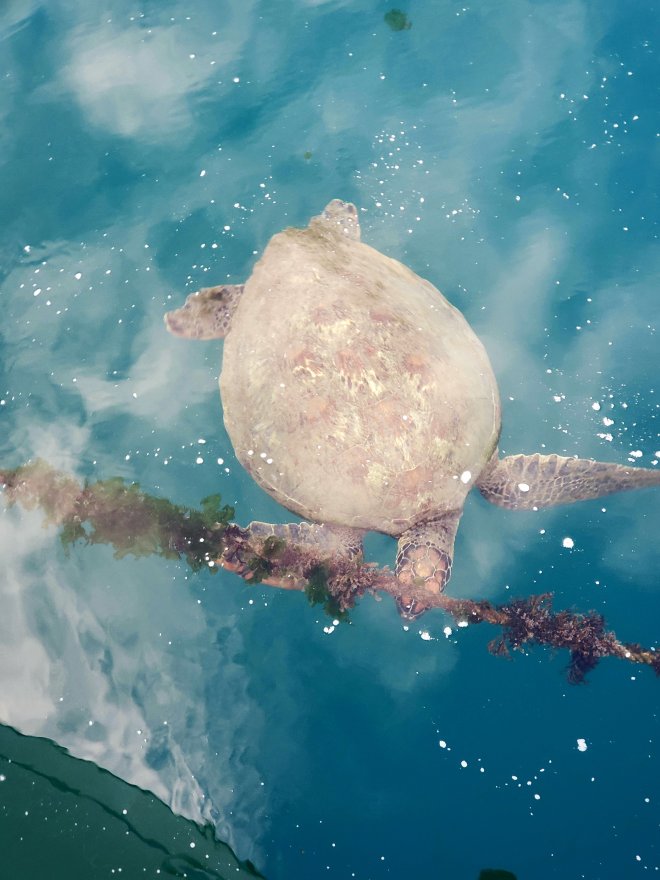 As you look through your lens this week, pay attention to lines.

The word Lines holds so many meanings. It even evokes memories from my schooling so long ago.

Write twenty lines said the French school teacher. “The capital of France is Paris not the School Rugby pitch”. And stop looking out of the window.

Now, if the French teacher had said “You will need to learn French because one day you will live on a yacht in French Polynesia” my attention would have snapped back to the classroom, in an instant. My French never did improve.

So here I am attached to a mooring buoy looking through my camera lens at lines.

Lines are everywhere on yachts. Something has to hold the mast up. It’s known as the rigging.

Using a line, you can drop the hook or pick up a mooring ball in exotic locations and be at one with nature.

Colour changes depict the depth contour lines in the lagoon.

And then there’s the line of breaking surf over the reef.

Note the rugged outline of the island terrain forming lines in the sky.

When you look around, you find lines everywhere.

Weekly photo-challenge. This week, show us an image of an awakening.

It’s official, the cyclone season is over…. well according to the Muscovy Duck. He must have had some form of awakening.

The Muscovy Duck; as featured in several previous blogs, spent his cyclone season by choice out of the water on the marina pontoons.

He suffered in the heavy rain and looked bedraggled at times, so against my better judgement I fed him.

He responded to my help with a waggle of his tail and a gift of a feather.

Unfortunately, he had a roucous appetite and what went in, came out quickly. It wasn’t difficult to follow his messy trail along the pontoon.

Gradually as the weather improved, so did his plumage. He flexed his wings and took a few short flights and swimming trips.

My husband and I sailed off to another island over Easter. On our return, much to my delight, we discovered the Muscovy Duck back in the water.

Fending for himself he swims around eating the marine life under the pontoons. His plumage is now magnificent.

When he spots me, he swims over and I have a little chat. He’s mute, which is just as well as he wouldn’t get a word in edgeways.

He’s such a poser. It’s hard to resist taking photos.

So is my Muscovy Duck right? Has he had a ‘spring awakening’? Is the cyclone season really over? I do hope so.

For this week’s photo challenge, point your camera at something or someone that puts a smile on our face (or just a smiling face)

All around Tahiti are large posters of smiling faces. What does it all mean?

Turns out that in March 2011 an artist photographer named JR decided on the Insideout project. It involved global participation. People share a portrait and make a statement.

In Tahiti the statement was smile for peace.

The photos appeared a couple of years ago around Tahiti. It’s good to look up and see a smiling face: smiling is contagious.