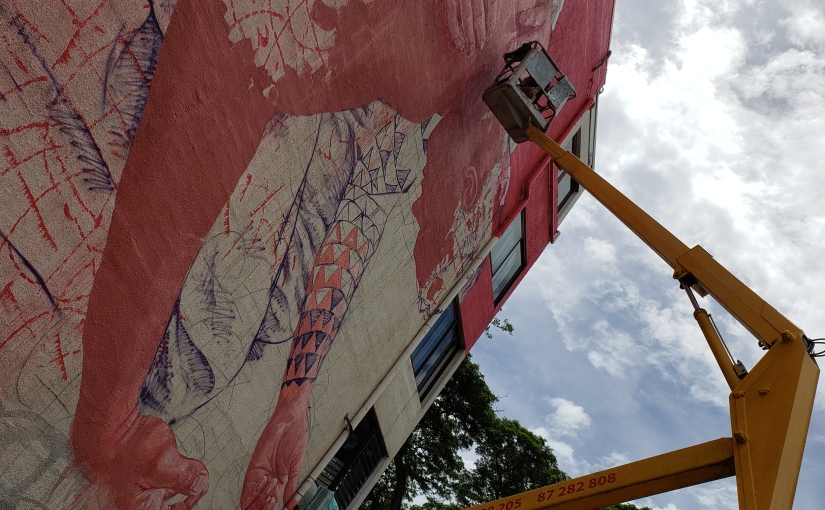 The last few days have been hot and sunny in Tahiti and I am optimistic that the improvement in the weather heralds the end of the cyclone season. The last few weeks however, held a mixed bag of hot humid weather, heavy rain, thunder, lightning, interspersed with some cloudless sunshine.
Spare a thought for Fintan Magee a famous Australian Street artist. 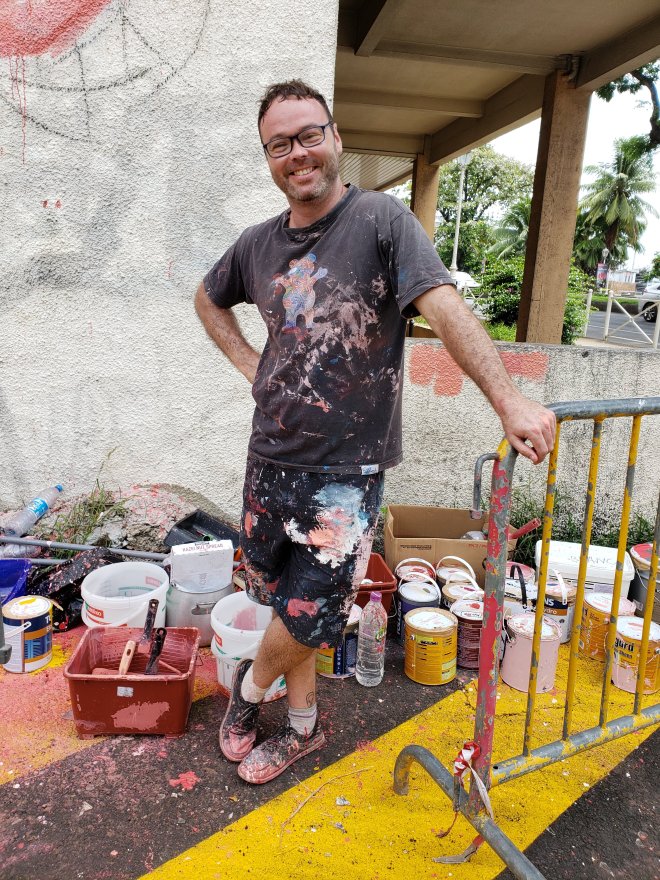 He was tasked was creating a massive street mural on the side of a block of flats overlooking a car park in Papeete. With what must have been months of preparation, the first brushes of paint were applied to the wall around the 14th March right in the midst of the foul weather. 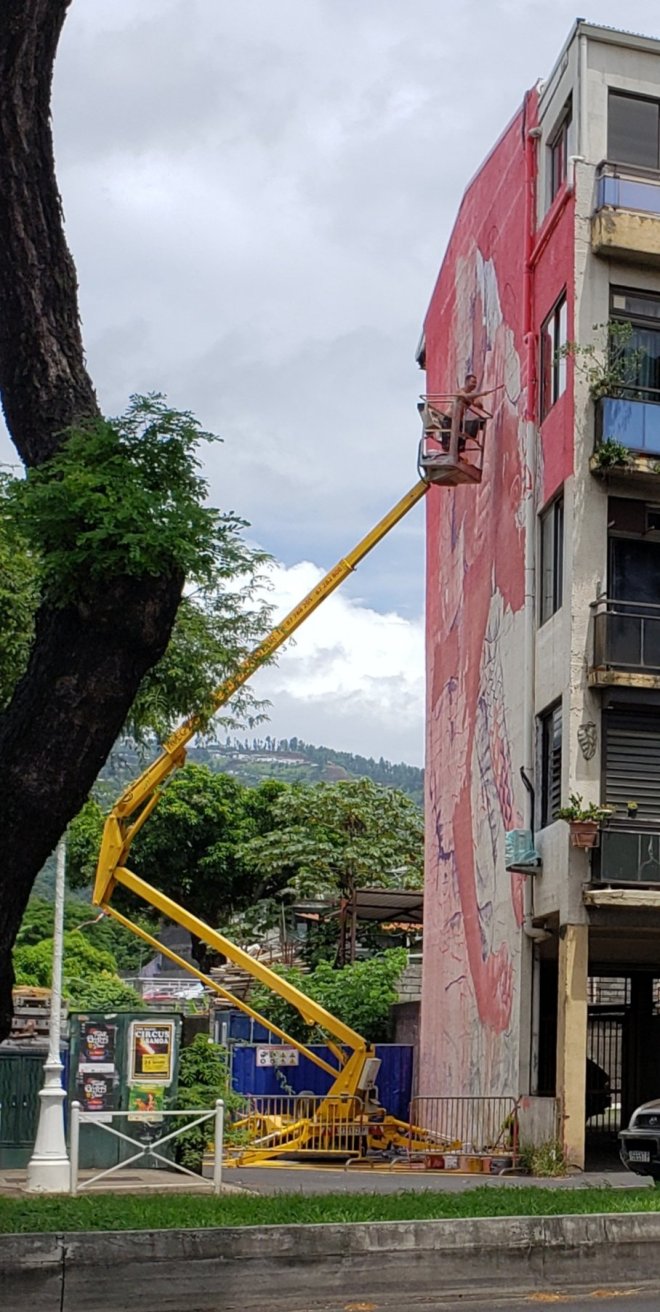 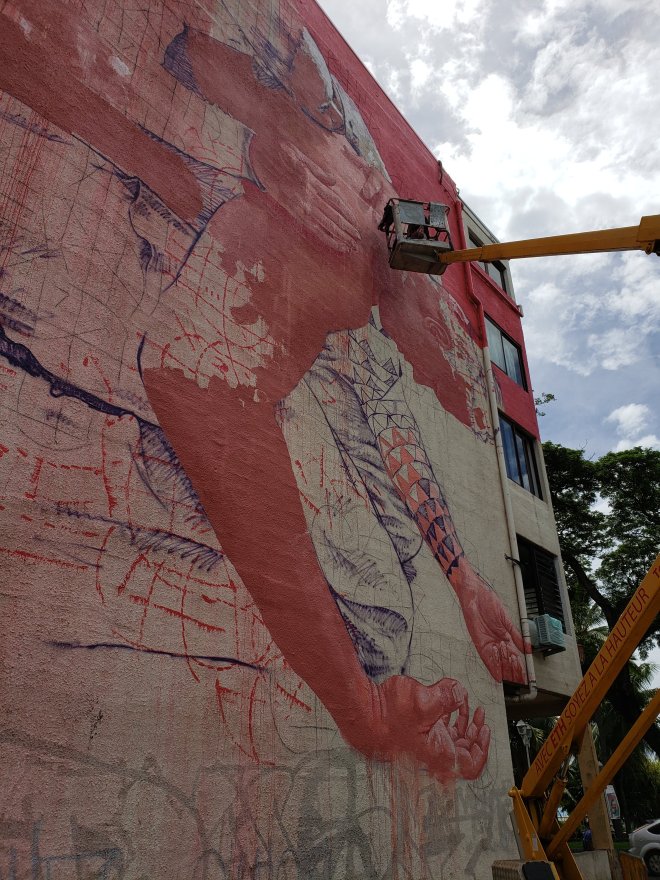 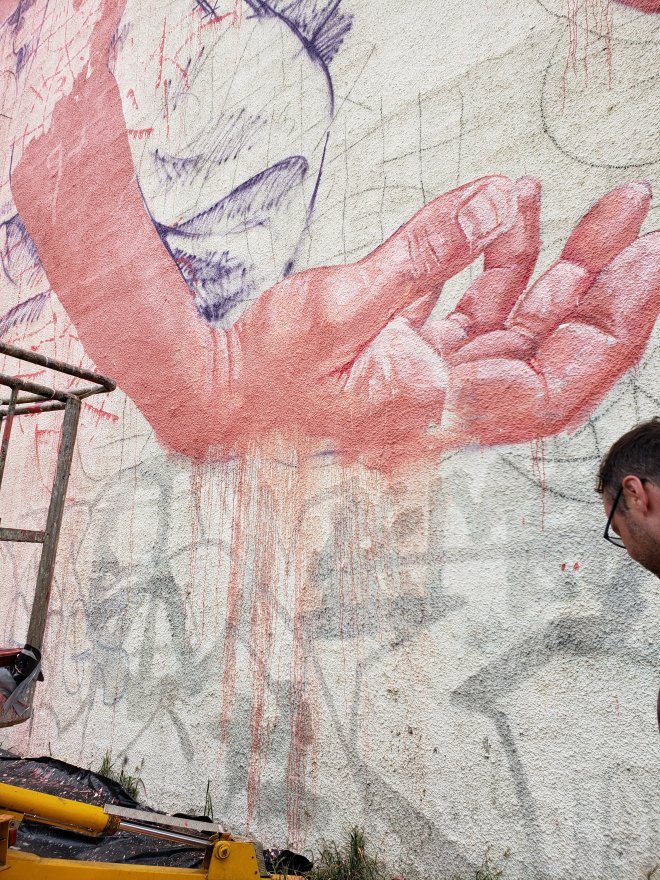 The artist worked long hours every day until the mural was finished.

When I asked him what was the theme of his mural, he said “Love”

The project was completed with Fintan Magee’s signature on the 21st March. I hope he was pleased with the results. I thought it was rather amazing. 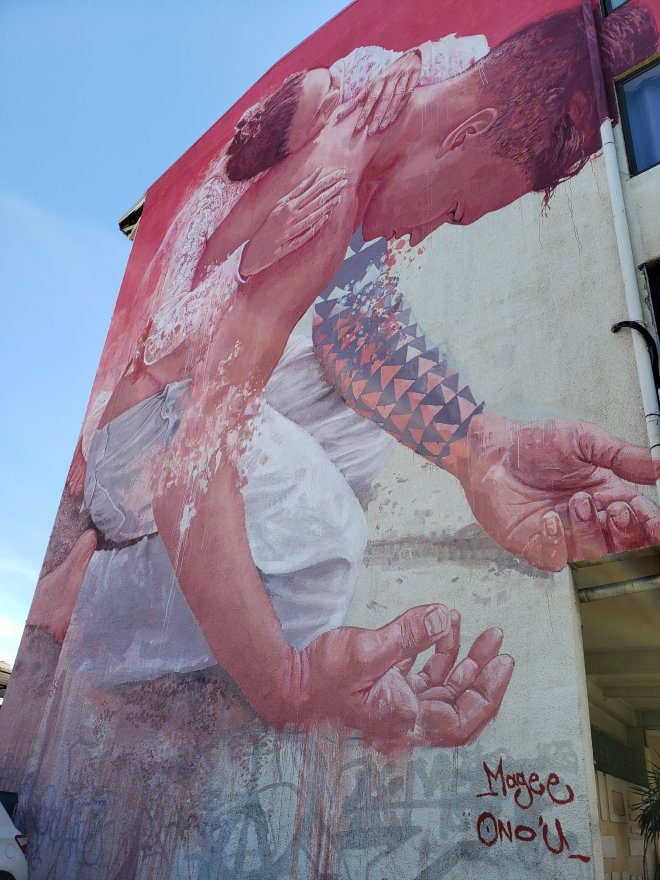 How blessed we are in Tahiti, to have such dedicated artists, who create all these wonderful masterpieces for everyone to enjoy.

Last Friday 8th February, I just happened to be cycling past the cruise ship part of the Papeete Port and noticed that a load of brightly painted skips (dumpsters) now occupied the coach parking area. Colourful lights were being erected to highlight them all. With my love of Street Art, I had to find out more.

I’ve often seen a few interesting skips, painted with street art, delivered to the dock when a cruise ship visits. Rubbish is chucked into the skips, which are lifted up on to the lorry base and driven away. Five painted skips have been in use since 2015.

16 new skips arrived and the Tahitian Society of Public Sectors (TSP) entrusted them to artists of the Hamani Lab in Tahiti to paint as part of the Urban Care Project. Artists, Abuze, Cronos, Ennio, HTJ and Komosulo gave the skips a makeover. The idea was to highlight a new generation of artists as well as changing the professional image of waste collection.
The TSP, in collaboration with the Port Authority of Papeete, presented the artists’ work on the platform of honour at the Vai’ete Square next to the Cruise Ship Dock. We went along to admire the creative artwork.
I loved the results. 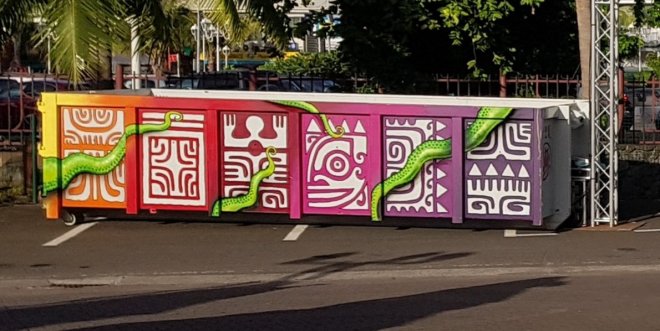 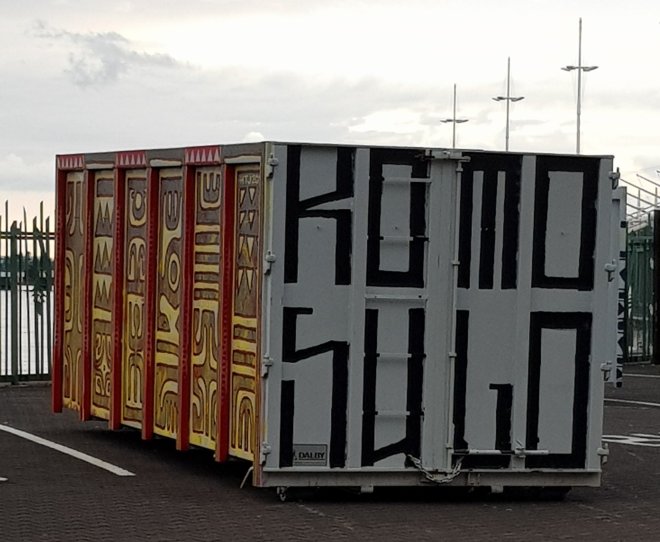 The artists took the opportunity to exhibited their most recent works.

Since the presentation event, I’ve been playing “Spot the Skip” around Papeete. So far I have seen four in action at the Port.

Straight after the presentation, a cruise ship arrived and two of the new skips were in use.

I think it’s a great idea. 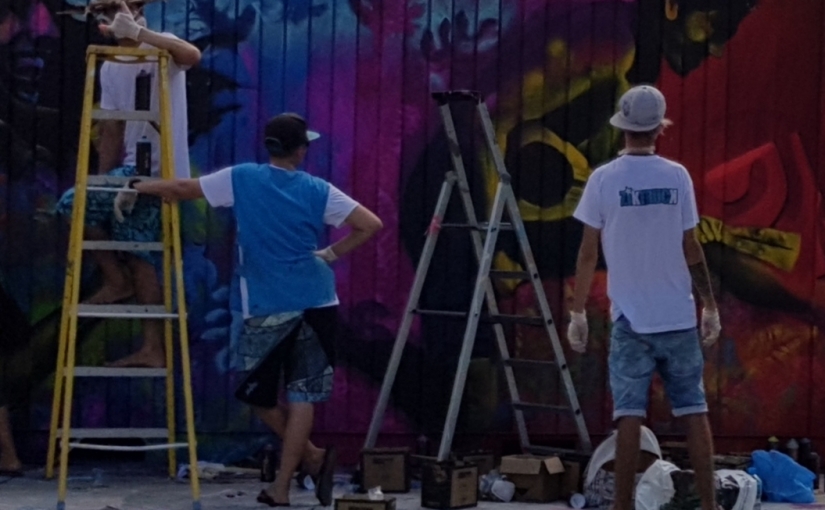 This one was done last October and is called herehia.

One of the striking features as you walk around the streets of Papeete, are the massive street art murals, painted on the walls of otherwise faded and sometimes decaying buildings.

Last year I found two artists in action and I was fascinated. 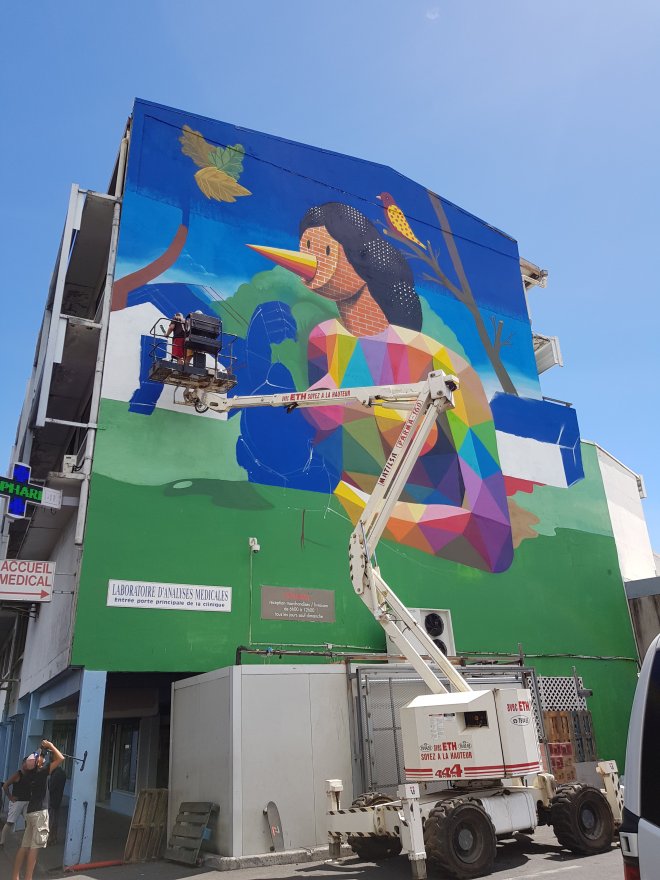 It all kicked off with the Ono’u festival in May 2014. Talented Graffiti and Street artists from around the world, were invited to express their unique street art skills around the city of Papeete.

There’s a museum of Street Art in Papeete. It hosts the ono’u event. 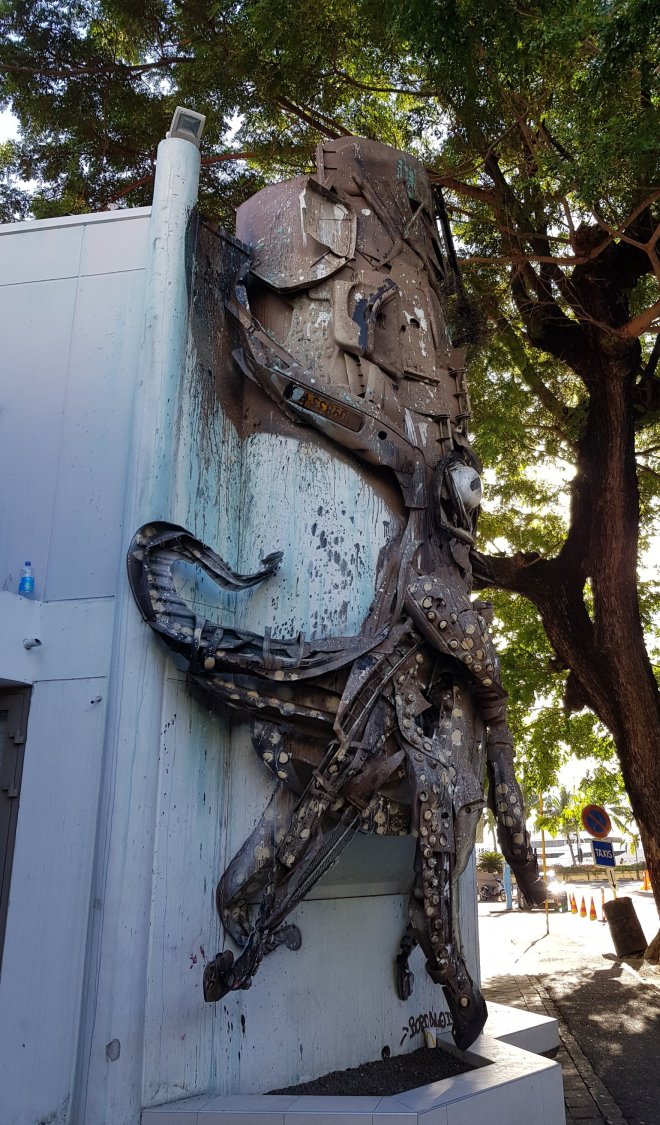 I love to see the artists in action from start to finish. So this year we sought a few out. 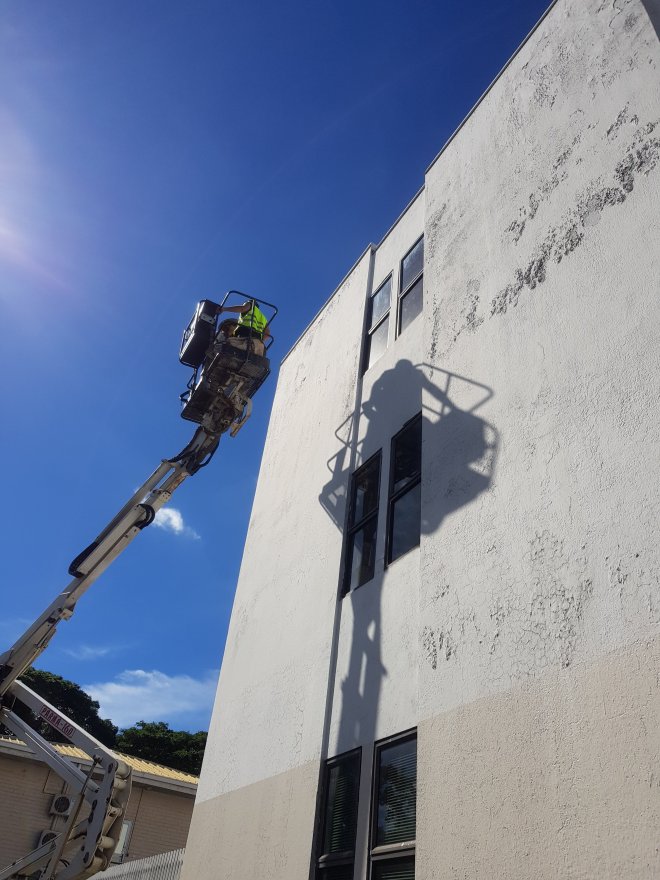 Difficult wall to work on. Christina Angelina in Papeete

This is how it looks now. All the blue washed away.

And the wall next door.

During the festival, in the Poafi Park, up and coming local street artists were encouraged to display their talents under the guidance of the experts. 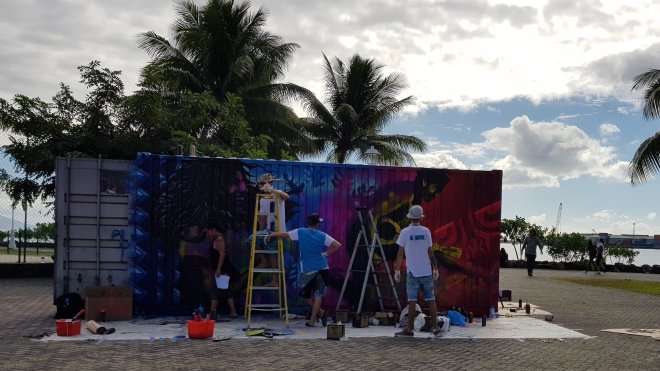 Recently I followed the progress of two local artists in action.

They took four days to produce a bright mural depicting the roots of Tahitian life. 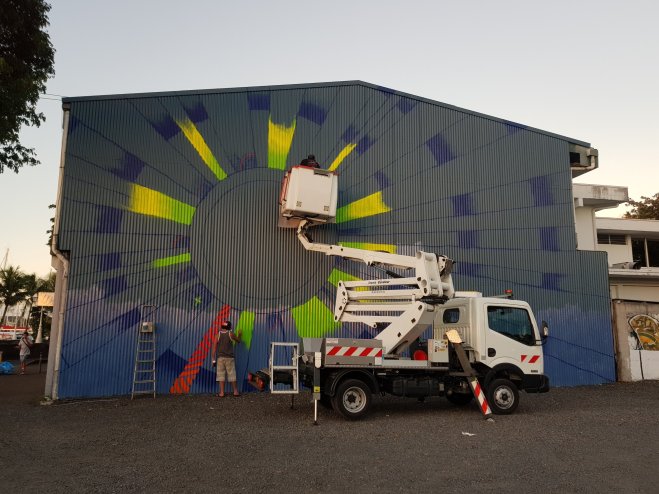 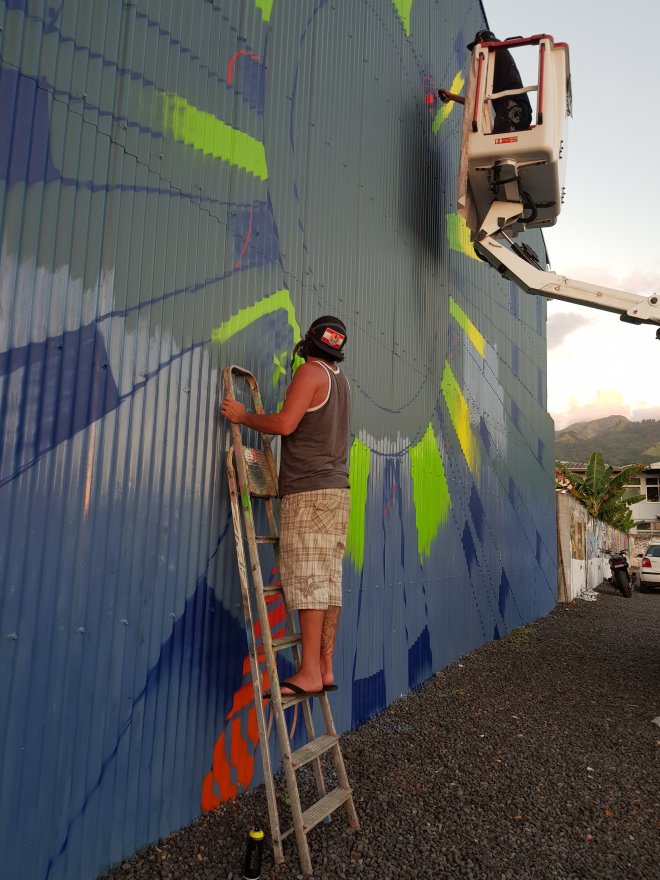 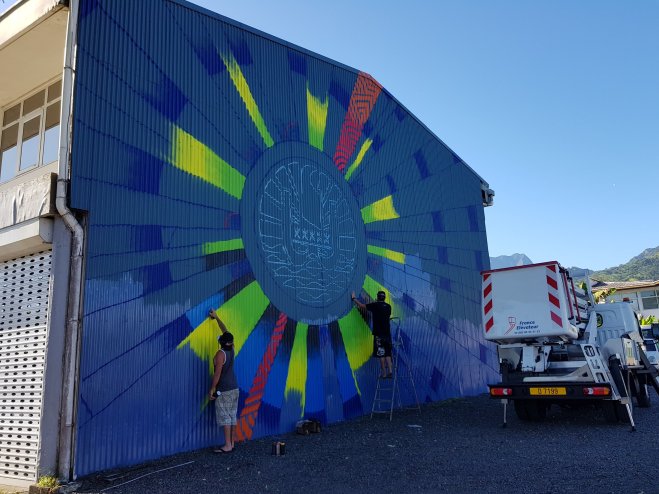 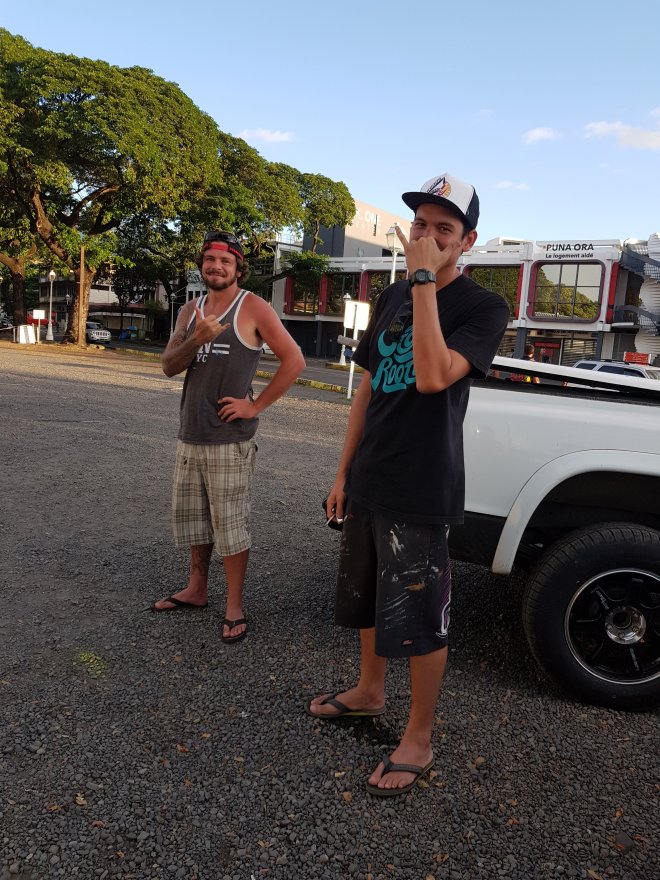 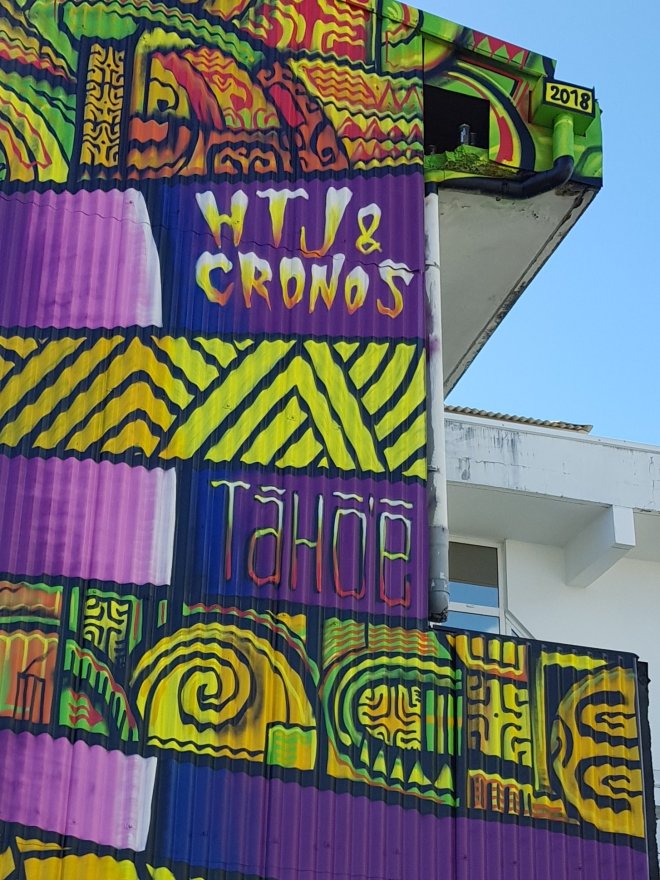 I hope they felt proud to sign their names. I thought it was stunning. 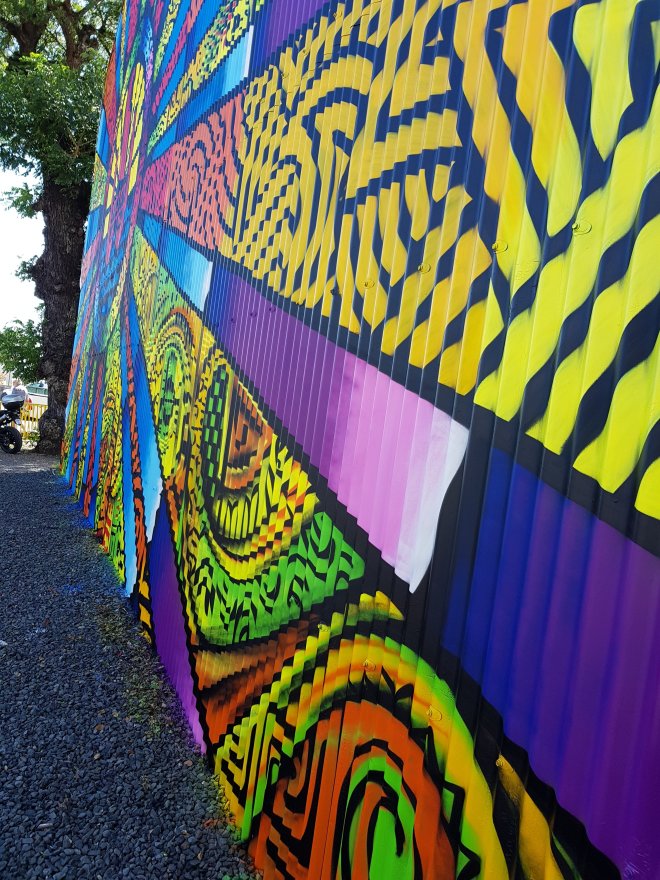 I look forward to seeing many more street artists in action. They are awesome.